The Civil Aviation authority of South Africa hosted the second instalment of the Civil Aviation Industry Awards at the Council for Scientific and Industrial Research (CSIR) International Convention Centre in Pretoria on Friday the 13th December.

The glitzy event was slightly delayed due to massive volumes of traffic on the all the motorways around Gauteng, unfortunately the date coincided with the beginning of the festive season holidays together with normal long weekend traffic. The delay gave all the guests that were there time to catch up while being entertained by a solo saxophonist.

Once everyone had arrived and made their way to the function hall the event got underway with a performance by the Johannesburg Opera Tenors, offering brilliant renditions of music made famous by the likes of Luciano Pavarotti, Plácido Domingo and José Carreras.

The ever popular Leanne Manas was the Captain for the evening flanked by her two co-pilots Jonathan Boyton-Lee and Maps Mopanyane. Ms Poppy Khoza, the Director of Civil Aviation, was invited to the stage to welcome all the guest and offer some insight into the vision behind the Civil Aviation Industry Awards.

In her address Ms Khoza eluded to the “Mixed Bag” which 2019 had delivered the aviation industry, with many positives and unfortunately many negatives as well. The Celebration of the 75th anniversary of the International Civil Aviation Organization (ICAO) and the 50th anniversary of the African Civil Aviation Commission (AFCAC). Ms Khoza briefly touched on the worrying trend of  accidents in specifically the General Aviation Sector and pleaded that care be taken to curb this in the future. Ms Khoza concluded her address by thanking all the entrants and congratulated all the nominees for the wonderful contribution they made to the industry in 2019.

Mr Earnest Khosa, a SACAA Board Member then introduced the Deputy Minister of Transport, Ms Dikeledi Magadzi  and invited her to the stage to deliver her Keynote Address.

The Deputy Minister wished everyone a belated happy Civil Aviation Day, which was celebrated on the 7th December, just a week earlier with the theme “75 Years of connecting the World”. Ms Magadzi emphasized some statistics pertaining to the global aviation industry, the importance of the aviation industry in Africa and South Africa.

“Every day, more than 100,000 flights transport almost 12 million passengers worldwide” she explained “Air transport supports 6.2 million jobs and USD 55.8 billion in Gross Domestic Product in Africa, and the World Economic Forum recently stated that by 2035, Africa will transport an extra 192 million passengers a year for a total market of 303 million passengers travelling to and from African destinations. Similarly, our own country, South Africa, has a vibrantly busy civil aviation industry, providing jobs to 70,000 people for both skilled and unskilled labour in South Africa. The airline subsector pays nearly R6.0 billion in tax”

Ms Magadzi emphasised that that aviation safety and security remains the departments greatest concern and will not hesitate to do what it takes to keep South African skies safe. The Deputy Minister concluded by congratulating every runner-up and winner of an award.

Former Director of Civil Aviation and former CEO at the South African Civil Aviation Authority, Captain Colin Jordaan, headed the diverse adjudication panel, took to the stage to offer some insight on just how the nominees were adjudged to be worthy recipients of these highly coveted awards. He was followed by Ms Puleng Mapete who represented Nugubane and Company, the auditing firm contracted to verify the fairness of the process. 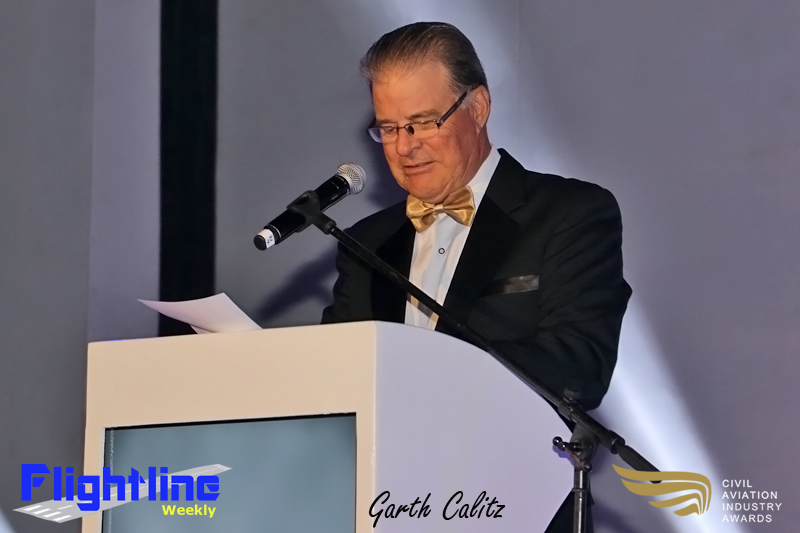 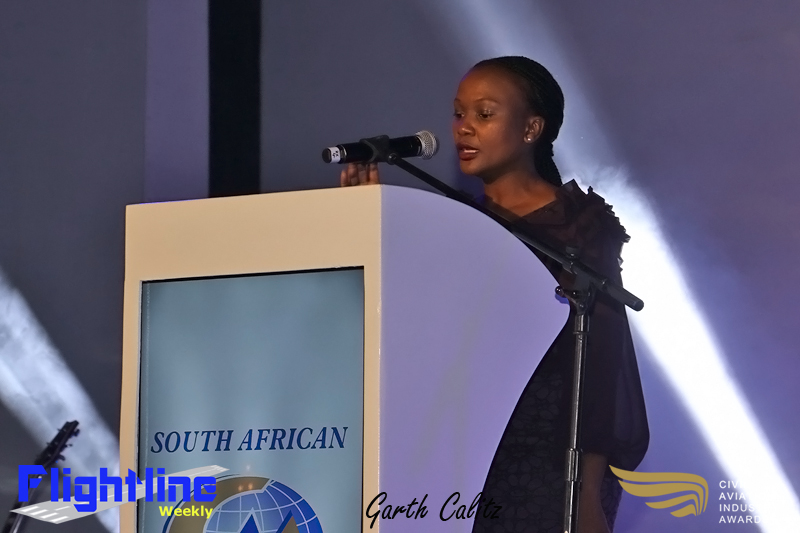 Starters  were then enjoyed to a brilliant performance by the Ballet Theatre, and once everyone settled down it was time to get to business of the evening, the awards.

The first Award was for Aviation Safety, with no less than thirteen nominees, ACSA Cape Town International airport were adjudged the winners followed by ACSA King Shaka International Airport and Airbus Helicopters Southern Africa as first and Second Runner up respectively. 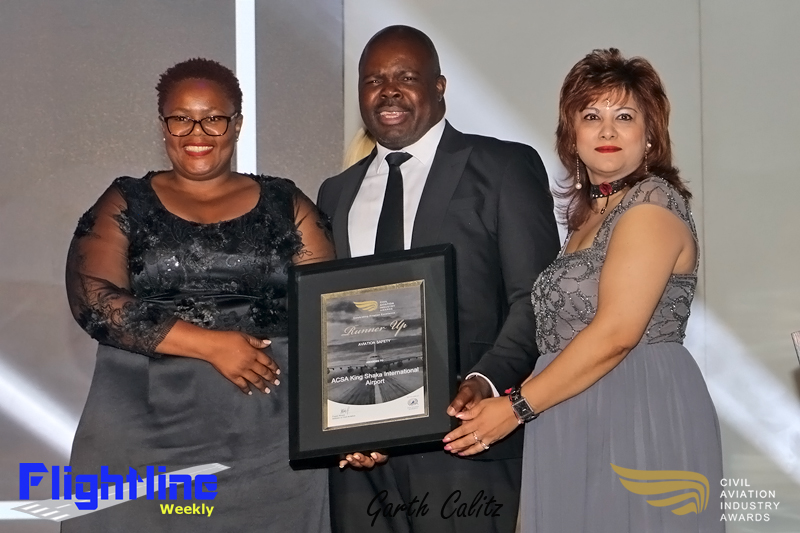 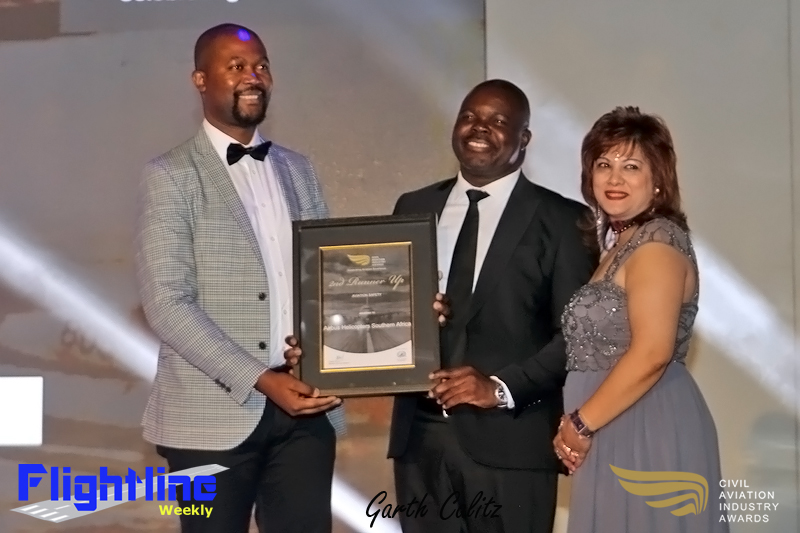 Air Traffic and Navigation Services  were acclaimed for their outstanding contribution to Aviation Transformation, Jet-Nav were awarded 1st runner and Newcastle Airshow received the 2nd Runner Up position. 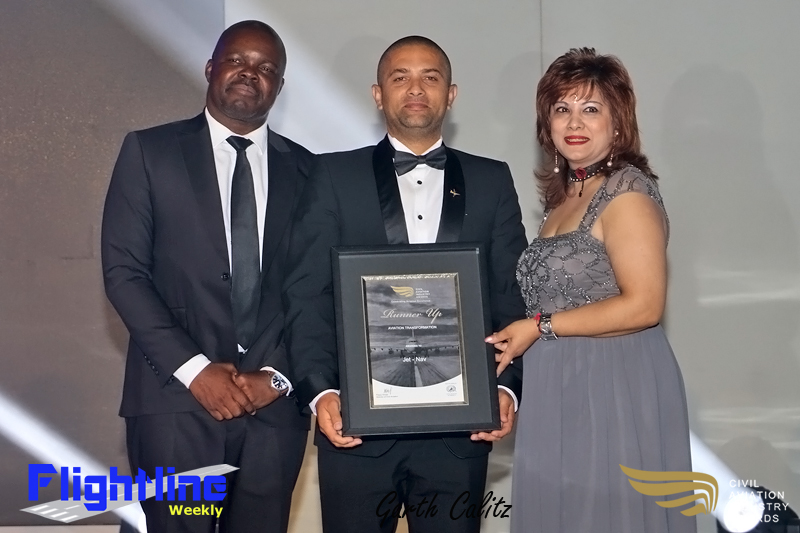 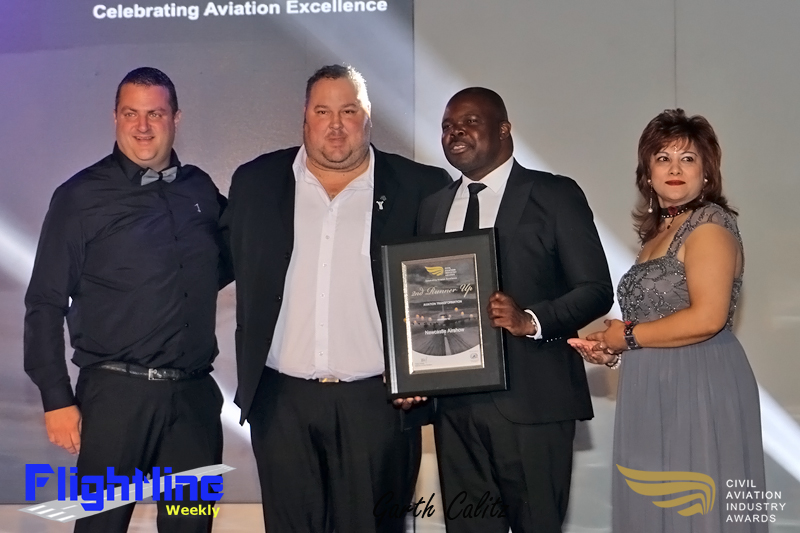 The Aviation innovation award was won by Satellite Authorisation Systems for the amazing work done in innovative communications infrastructure on SAA’s live aircraft, facilitating the in-flight tracking solution in real-time. Sentian Aerospace and ACSA OR Tambo International were placed 1st and 2nd Runner up respectively. 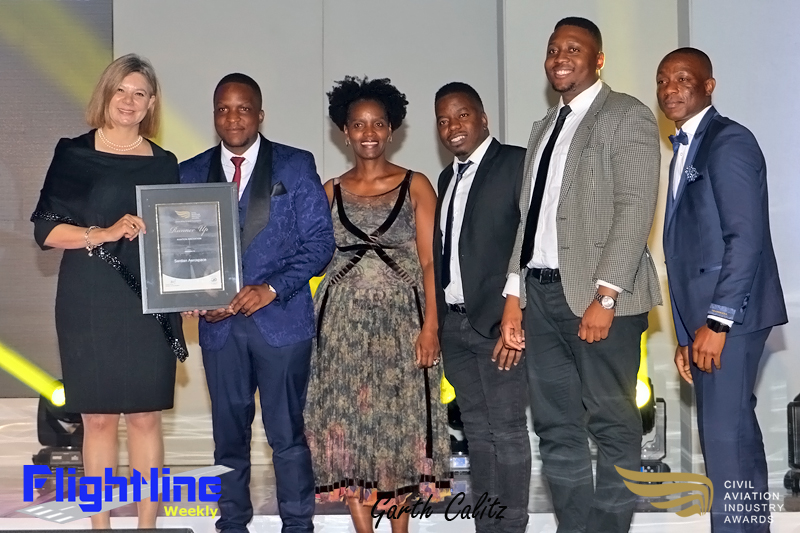 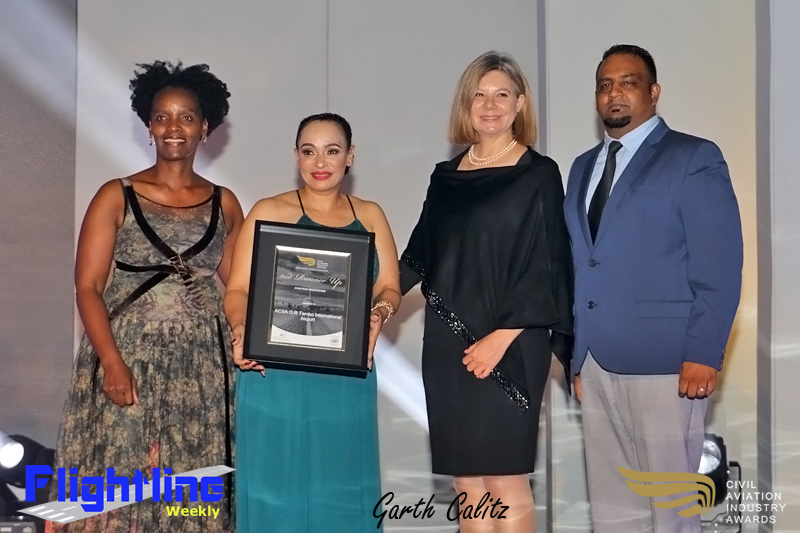 ACSA OR Tambo International airport took top honours in the Aviation Sustainability and Environment Category, ACSA King Shaka came in as 1st Runner up and 43 Air School managed the 2nd Runner up position. 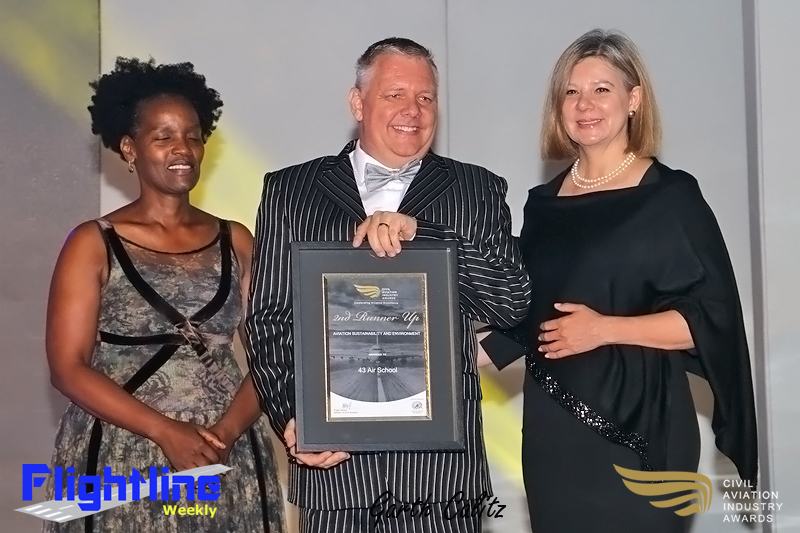 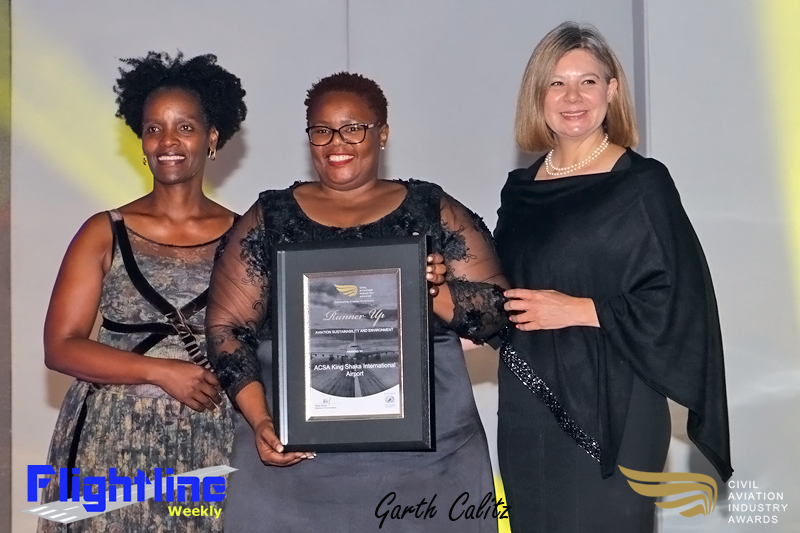 Elmar has been with the company since 2005, initially as chief financial officer, before taking over the reins as CEO in 2015. While Gaborekwe is the National head of aeronautical weather forecasting in SAWS and non-executive director with South African National Space Agency.

Air Traffic and Navigation Services were awarded the prestigious title of best performing in the field of People Development. The ATNS Aviation Training Academy (ATA) is a unique organisation in terms of the training on offer. Not only do they provide Air Traffic Services and Engineering Training to their staff members, but also provide a wide range of aviation-related and safety-related courses throughout the Continent and into the Middle East. The 1st Runner Up position went to FlySafair followed by ExecuJet Aviation Group. 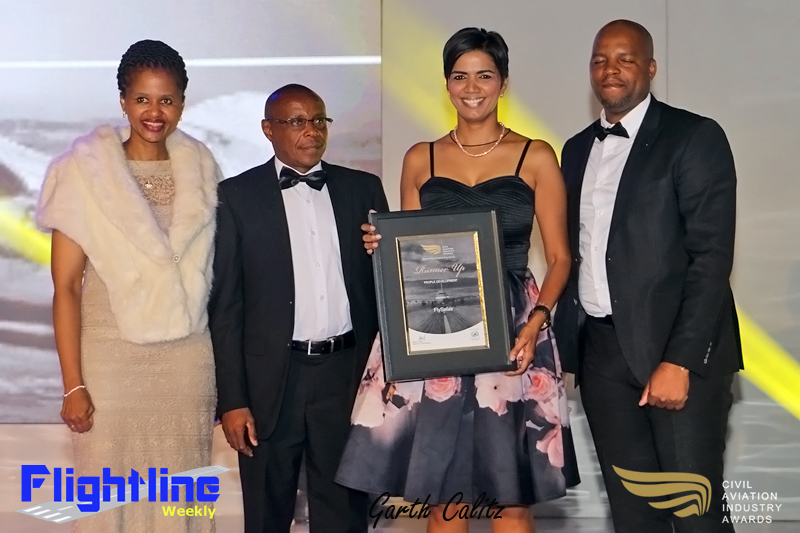 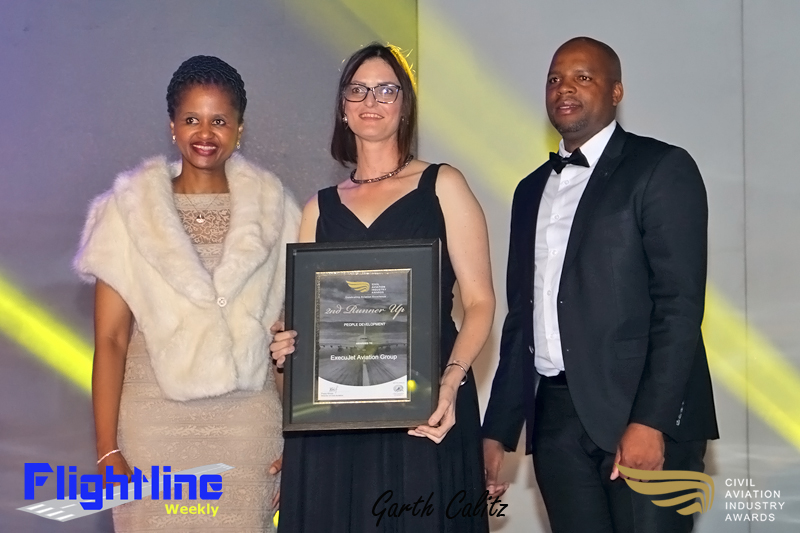 The Aircraft Operator of the year award was a tightly contested affair with only four nominees, FlySafair, the most on time airline in the world however rose to the top, followed by ExecuJet Aviation Group and Comair Ltd. 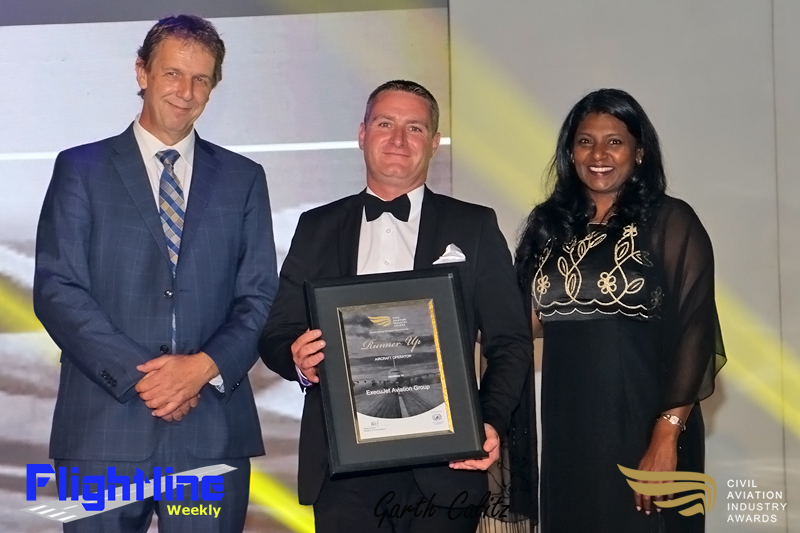 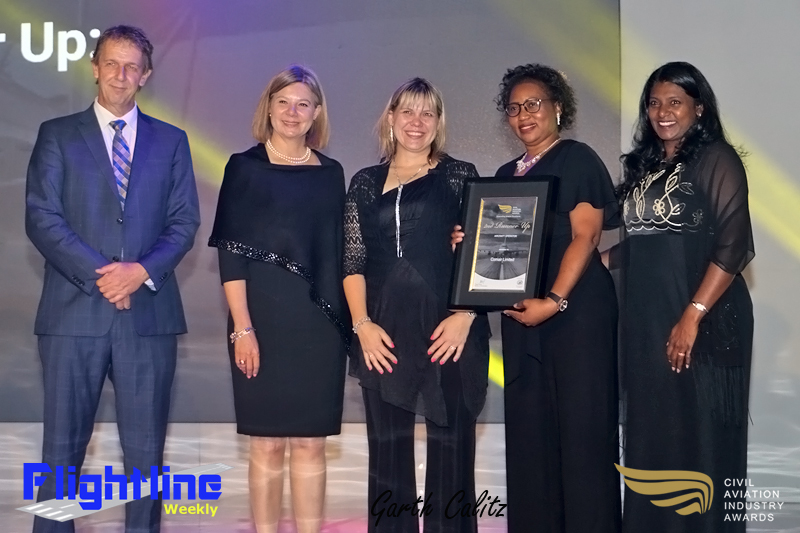 The FlySafair team barely had time to leave the stage before they were called back to receive the award for the best Aviation Maintenance Organisation. 43 Air School were place in  the 1st Runner Up position and Airbus Helicopter were recognised as 2nd Runner Up. 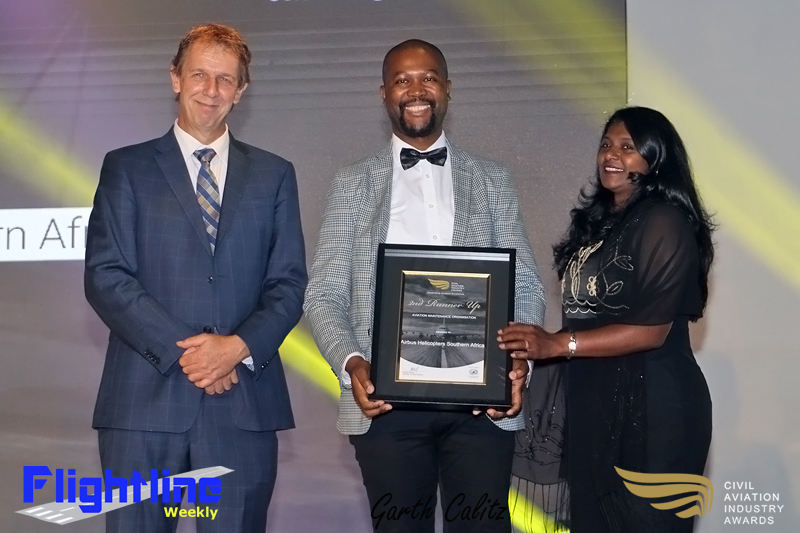 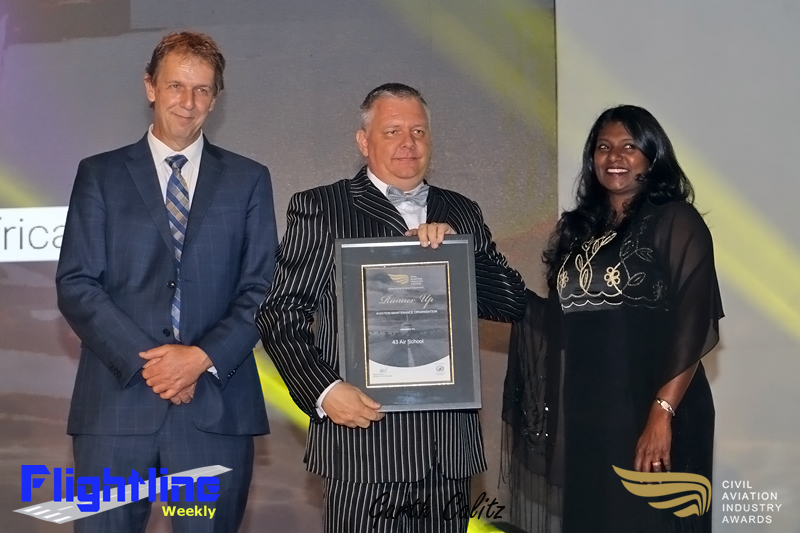 FlySafair once again made their way to the stage as they were Aviation Customer Services champions, a fact that most of their customers will attest too FlySafair have taken airline customer service and especially communication to a new level in South Africa. 43 Air School were awarded 1st Runner Up position and ExecuJet walked away with 2nd Runner Up. 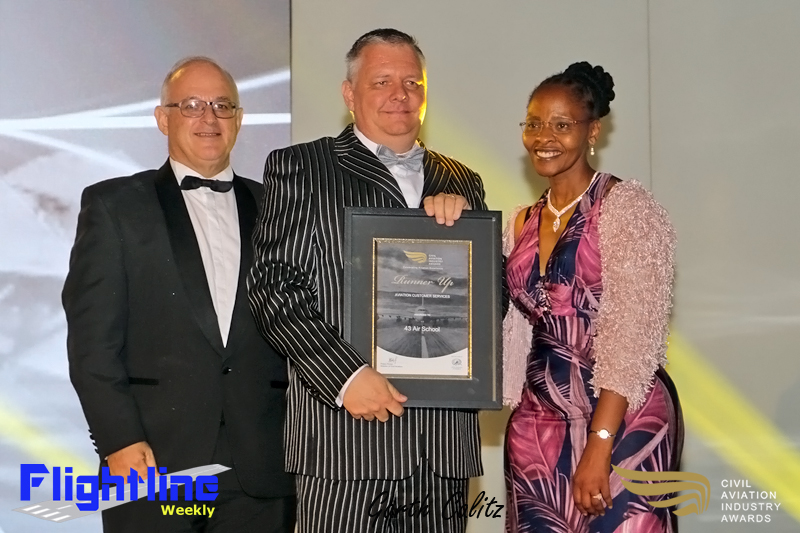 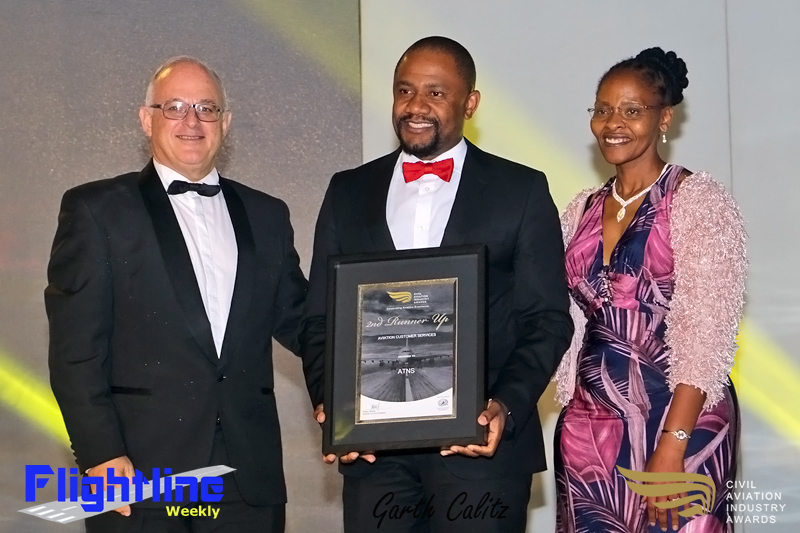 The Award for Best Aviation Training Facility went to AirTraffic and Navigation Services, edging out 43 Air School and SA Airlink. In this category there was an impressive fifteen nominees. 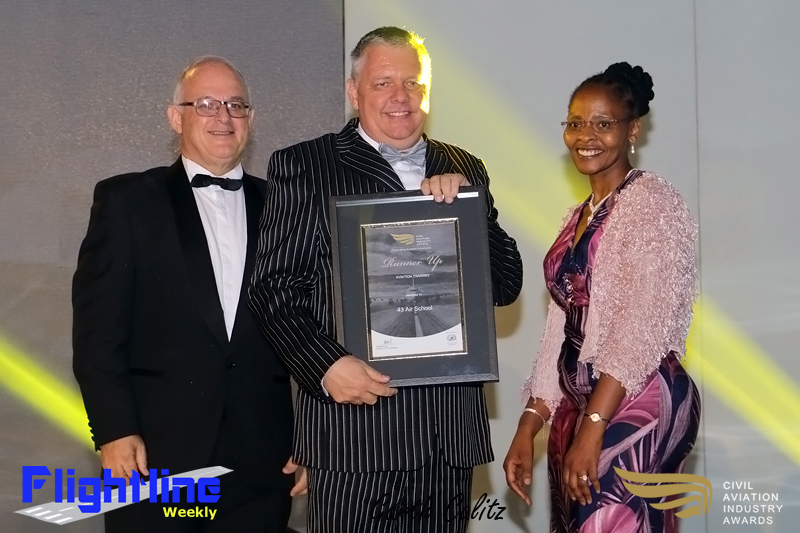 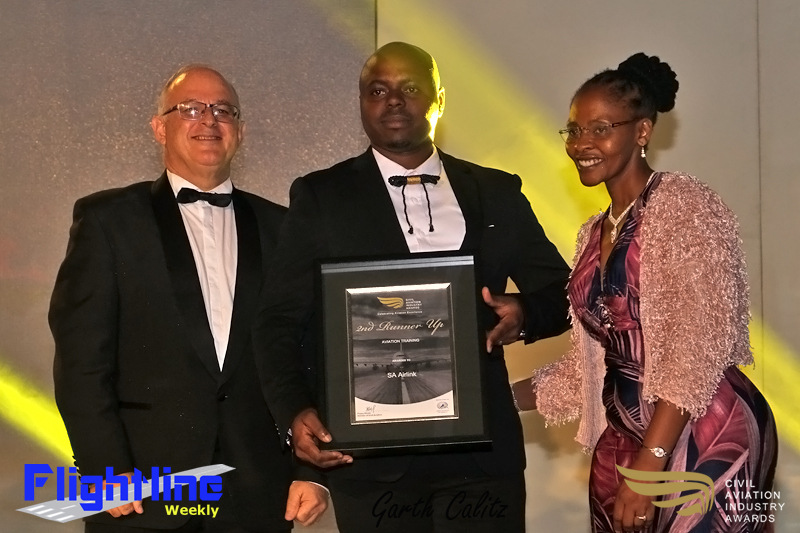 A trend was starting to form with FlySafair taking yet another award in the Aviation Security Category, SA Airlink were in 1st Runnuer Up position, as there were only two nominees no 2nd Runner Up was awarded.

An award for Aviation Research and Development was awarded to Riaan Stopforth, from the University of Kwazulu Natal, for his ground-breaking work in the development of an unmanned aerial vehicle (UAV) intended for search and rescue applications. The South African Weather Services were adjudged to be 1st Runner Up and Jireh Aviation Research received the 2nd Runner Up position.

Riaan could unfortunately not make the ceremony

Boitumelo already showed promise while training for her pilot’s licence, being the Most Dedicated Student in 2014 and the Student of the year in 2015. She was the first in the world to shadow with Lufthansa, a German Airline that mentors’ learners from all over Africa. Currently a Flight Operations Assistant at a charter company, her dedication and drive has been obvious in every position she has held so far. Her ability and desire to give back to the community and aviation became more visible as she developed as a commercial pilot. One of the founders of Aviation Development In Africa, she has engaged and encouraged other young women to achieve the dream of becoming pilots; in an industry skewed for many decades against the advancing of women in aviation. Congratulations, Boitumelo; your efforts in spreading the word to all young women and men to enter the industry of aviation, is inspirational.

Brian Emmenis is a veteran commentator and broadcaster who first started broadcasting in 1978, and he did his first airshow in 1985. Brian has broadcast for kings, queens, presidents, prime ministers and sheikhs around the world and has worked at major airshows around the globe. He is the only permanent airshow commentator in Africa, and has received many international, national and local awards for his contribution to aviation in South Africa. Ten years ago, he started a broadcast school at this own expense, where he has been training new voices that are fluent in most of the country’s ethnic languages. His commitment to aviation safety and his professionalism, humanity and altruism at incidents and accidents during events, deserves to be honoured and recognised.

The partnership between the South African Civil Aviation Authority (SACAA) and the South African Military Health Services (SAMHS), in ensuring SACAA’s compliance with the aerospace medicine standards and recommended practices of the International Civil Aviation Organization (ICAO), has placed South Africa on the map, in Africa and globally.  This strong and formidable stakeholder relationship has a long history, originating from the Institute of Aviation Medicine, until the eventual ICAO-compliant, SACAA Medical Department decentralised and designated civilian aviation medical examiners to conduct examinations on aviators. Some of the outcomes, such as 100% in ICAO audits, hosting of conferences and partnerships with medical universities attest to the effectiveness of this enduring relationship, which benefits the physiology and psychology of man in-flight.

Arthur Bradshaw has become a legend in aviation and Air Traffic Control (ATC) circles. He played a major role in transitioning the historical, expensive and inefficient, Public Service orientated airspace management industry, inclusive of ATC and Aeronautical South African Search and Rescue organisation (SASAR), into a viable, commercially successful and exemplary service provision, recognised globally. This action contributed millions of Rands in terms of savings to the State and airlines alike. Among other achievements, he managed the Royal Swazi hi-jacking drama, introduced the concept of “Special rules area” still in use today, assisted in the introduction of ATC licences and became one of the authors of the ICAO Global Air Traffic Management (ATM) concept which informs the global and regional Air Navigational Plans (ANPs), setting the stage for global Safety Management Systems and Aviation System Block Upgrades (ASBUS). His positions and activities, up to this day, would fill a page. His lifetime achievement in making a difference to aviation today.

The final award for the night was the prestigious Aviation Company of the Year Award and I believe it came as no surprise to see FlySafair being called to the stage once again to receive the coveted award, FlySafair really raised the bar this year, taking six awards in total, Well Done too each and every member of this winning team, may you go from strength to strength and continue to serve the SA public with distinction.

With the business at hand out the way it and a few closing remarks by Luvuyo Gqeke Aviation Security Executive at the SACAA, it was time for everyone to join the winners in a celebration to the wonderful music of “Fire and Ice”.

Chuck Yeager - The Man that Changed Aviation 73 years ago