Since the partnership formed in 2017, the Flying Lions quartet have been showing off their supreme skills in Puma Energy branded Harvard aircraft - wowing crowds, customers and media alike with spectacular synchronised routines.

“Puma Energy and the Flying Lions have a shared ethos to be daring in all that we do and most of all, to wow and surprise our customers. The Flying Lions have been dominating the skies for over 18 years and we’re delighted to be extending our partnership with lead pilot, Scully Levin and his daring team Arnie Meneghelli, Ellis Levin and Sean Thackwray,” comments Seamus Kilgallon, Global Head of Aviation, Puma Energy.

“We’re thrilled to be part of the extended Puma Energy team and their sponsorship helps fuel our journeys across the South African skies – keep an eye out for the Puma Energy colours in a town near you!” said Scully Levin, The Flying Lions Team Leader.

Puma Energy have a simple goal in the Aviation sector – to deliver fuel at a competitive price to airlines and aircraft owners and operators, while at the same time meeting all international safety and quality standards.

When it comes to aviation, Puma Energy make it easy for our customers by handling everything – from importation, handling, storage, bridging and transportation, to onto-plane operations at Puma Energy owned airport fuelling depots using their own people. Puma Energy have built an excellent reputation in the sector, based on their efficiency, strong safety track record, high-quality fuel and competitively priced products.

They operate 79 airports across Latin America, Africa, Asia and Europe providing products and services to airlines, aircraft operators and aircraft owners. They work with a growing number of major international airlines including American Airlines, British Airways, Delta Airways, KLM, Emirates, Singapore Airlines, Qantas and Malaysian Airlines, as well as many domestic airlines around the world. So joining forces with one of top Airshow and Display teams in South Africa was a match made in heaven.

Arnie Meneghelli Recalls how this Partnership came about.

The dream of one day owning a Harvard was the product of my living and going to both primary and high school within a radius of 7 miles of Rand Airport in Germiston, South Africa.

Forty two Squadron was based at Rand Airport and in those early days of the 60’s, hundreds of Harvard’s were flown into Rand Airport, serviced and then test flown overhead the field. During those early formative years the seed of one day flying a Harvard was planted.

The chance to fulfill this dream came when the South African Air force decided to sell its large fleet of Harvard Trainers in 1994. We put in a tender and were awarded the first Harvard. Two more Harvards followed within the next few years. We shared the hangar where Scully Levin kept his Pitts Specials. Not only is Scully a formidable formation and aerobatic pilot, he is also a person who is always ready to help a fellow pilot. It did not take long for the idea of a formation aerobatic team flying harvards to pop up. One thing led to another and the Flying Lions Aerobatic Formation Team was born.

The choice of pilots was most important. We had to have aerobatic formation pilots who fitted the bill as far as the flying went, but more important to consist of pilots who shared the same mental attitude or culture, discipline and passion.

The current pilots that were flying in Scully’s Shurlok Pitts Special Aerobatic Formation Team were ideal – I, in fact was the odd man out!

So my training started in earnest and we eventually did our first display on the 4TH December 1999 at Kitty Hawk.

The quest for sponsors then began. We realized we were onto something good here. Harvards are noisy, large, they present well, and they have a nostalgic element about them with the South African public.

Unfortunately, they also gulp fuel at an alarming rate! Our expenses were rising and our pockets were emptying! The brushware company, which I owned in those days, Academy Brushware (Pty) Ltd was the first obvious choice to support our team, but the burden was a heavy one. Our next stroke of luck came when Peugeot started co-sponsoring our three-ship team on 1 March 2000.

In January 2001 BP fuels with their subsidiary Castrol became part sponsors with Peugeot and Academy Brushware. Later that year, they allowed us to negotiate a sponsorship with Nissan who were interested in giving us an overall sponsorship for the Harvards with full Nissan livery and no other branding.

This happened in January 2002, Nissan SA approached Peugeot and BP and took over their portion of the sponsorship, and in the meantime we had acquired another two Harvards.

This sponsorship lasted four and a half years and was a most successful one for both parties.BP Ultimate with its subsidiary Castrol then regained full sponsorship of the Flying lions and this lasted until 2010. Our association with BP was in actual fact the longest even though it was intermittent but had lasted from January 2001 up until August 2010, approximately nine years. 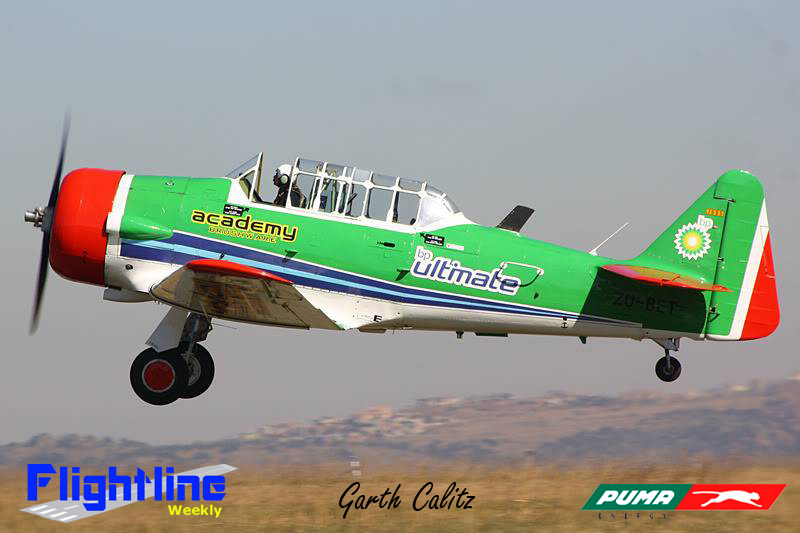 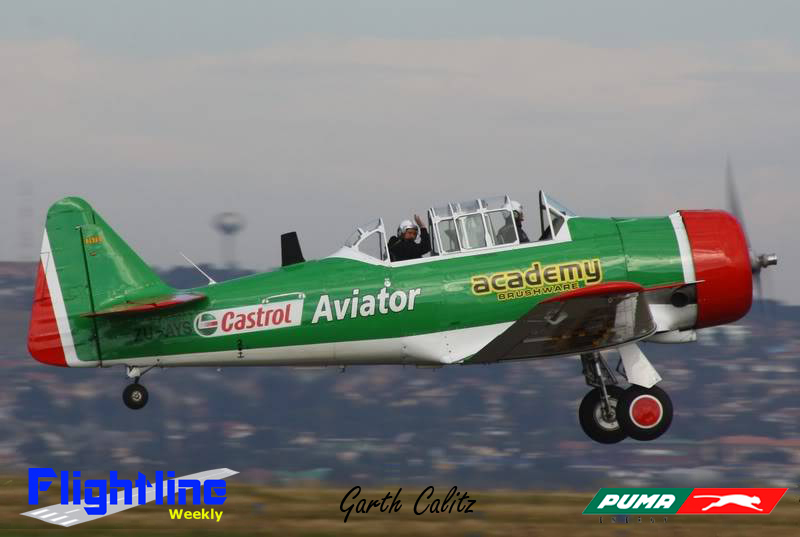 In August 2010 we entered into a temporary sponsorship agreement with Cell C and were flying the Cell C 4G logo around the country.

Eqstra then stepped in and the team operated under their banner for a few years. 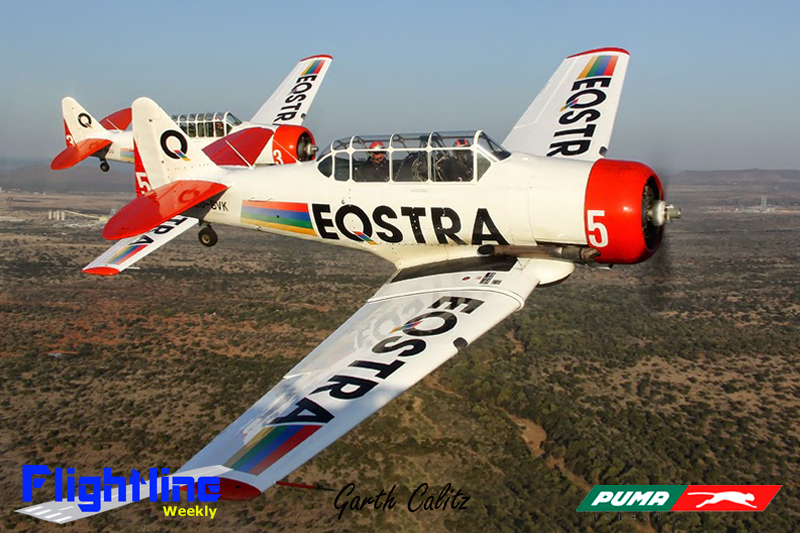 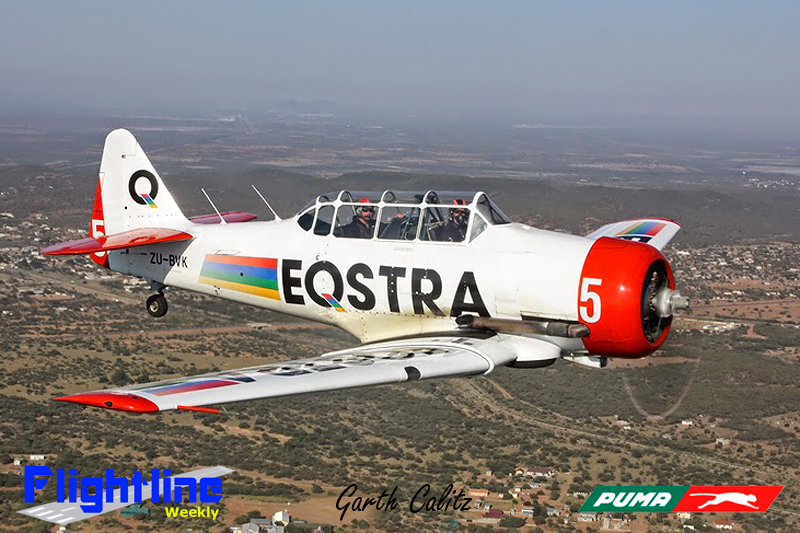 We then operated for a year and a half without sponsors keeping the aircraft flying with our own funds and engaging every potential sponsor, until, in December 2016, we did a display at a private lodge in the Skeerpoort valley and Puma Energy was there and were enthralled by what they saw.

The rest is history and we are now the Puma Flying Lions and have a magnificent relationship with Puma Energy. 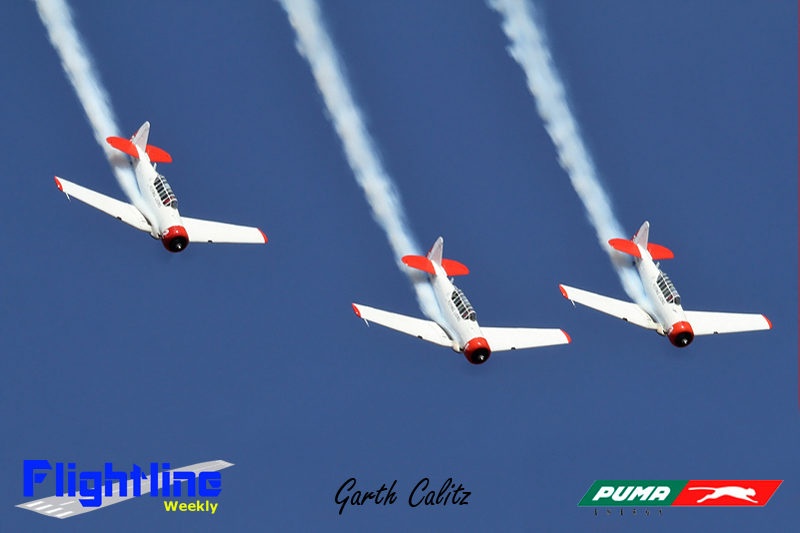 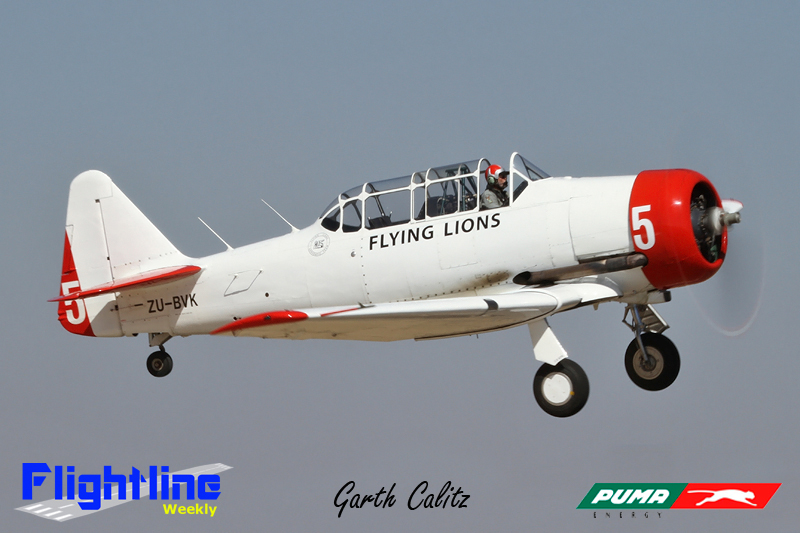 The team displays a four ship formation choreography of loops in Vic, in line abreast and in line astern ,with barrel rolls and straight rolls while trailing smoke which is nontoxic oil burning in the aircraft’s exhausts. They are well known for their precision formation flying and their magnificent night display.

The Flying Lions Aerobatic Formation Team has successfully dovetailed vintage aircraft, formation aerobatics and marketing to the benefit of all. And what keeps this all together and ticking is the passion of the pilots and the people behind the scenes that form part of a larger Puma Energy Flying Lions team.

AIFA to close Oudshoorn Base