In the summer of 1940 in the skies above Britain the Royal Air Force (RAF) won a victory that would change the course of history the “Battle of Britain”, as it became know, RAF fighters fought a German Airforce four times its number which saved Britain form invasion. The technically advanced Spitfire was credited with the victory and became a legend as a result, although most of the kills were actually achieved by the slower less glamorous Hawker Hurricane.

During the “Battle of Britain”, which began in earnest on August 8, 1940 Hurricanes concentrated mainly on the destruction of the German Heinkel He 111 and Dornier Do 17 bombers. These were the aircraft that would cause the most damage if allowed to get through. 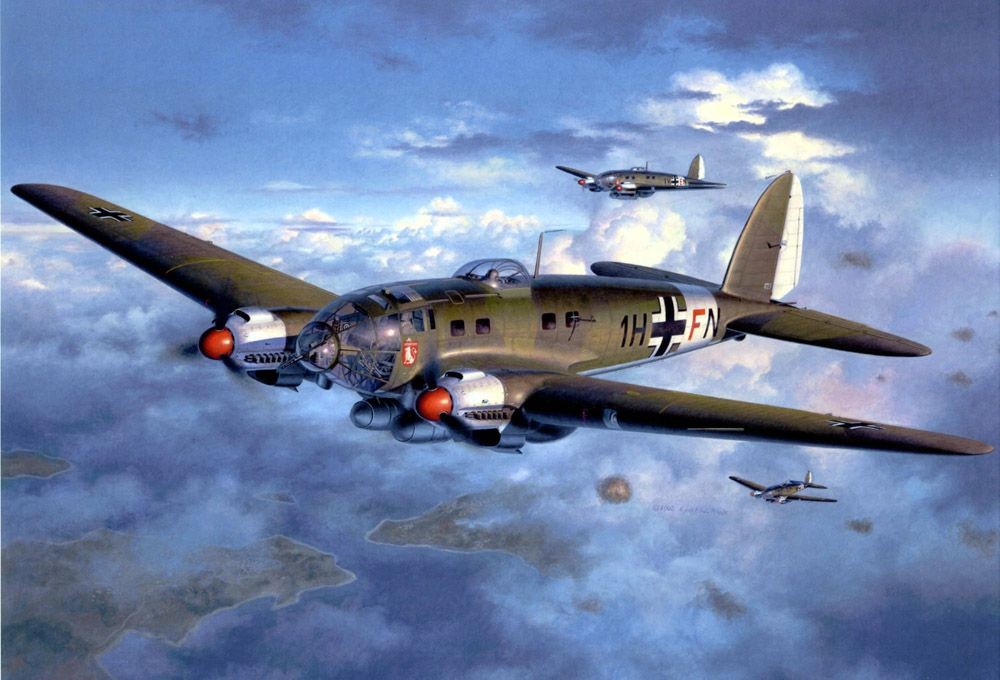 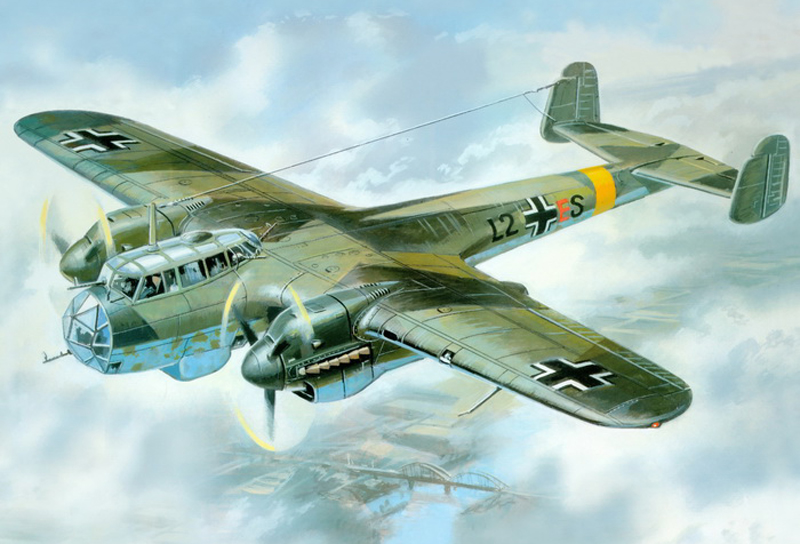 The only Victoria Cross ever awarded to a Fighter Command pilot was won by Ft Lt James Nicolson, a Hurricane pilot of No 249 Squadron who, on August 16,1940, while attacking a German aircraft in front of him, was pounced on from above and behind by other German aircraft. Nicolson's aircraft caught fire, but he continued his attack until he had shot down his original target, then parachuted to safety.

The highest scoring Allied pilot of the battle - a Czech named Sergeant Josef Frantisek, who claimed 17 victories - was also a Hurricane pilot.

The Royal Air Force had at that time thirty-two Hurricane squadrons, compared with nineteen Spitfire squadrons. This meant that six-hundred and twenty Hurricane and Spitfire fighters with another eighty-four assorted fighters like the Gloster Gladiator had to face the German air threat of 3,500 bombers and fighters. The Hurricane proved a real problem for the German fighters and bombers as it far outclassed them in manoeuvrability negating the speed advantage the German ME109 held.

The Hurricane also proved to possess an astounding propensity for adaptation, and the multifarious roles that it undertook earned it the distinction of being the most versatile of single seat warplanes to emerge from the Second World War.

The Hurricane was the work of Sydney Camm the prototype first took to the air on November 6, 1935 at Brooklands, and the initial production Hurricane I entered RAF service in December 1937, with No 111 Squadron. Powered by the famous Rolls-Royce Merlin engine, it became the first RAF monoplane fighter with an enclosed cockpit and retractable undercarriage, its first fighter capable of a level speed in excess of 300 mph and its first eight-gun fighter.

Under the command of Sqn. Ldr. J. W. Gillan, No. 111 Squadron quickly settled down with its new monoplanes, and on February 10, 1938, the commander personally demonstrated the prowess of the Hurricane by flying from Edinburgh to Northolt at an average speed of 408 mph. Even with a stiff tail-wind this was a remarkable performance.

Squadrons were rapidly equipped with the Hurricane thanks to the foresight of the Hawker Aircraft directors and at the time war was declared, on September 3, 1939 just short of five hundred Hurricanes had been delivered and eighteen squadrons had been equipped. These were all of the Mark I type, armed with eight 0.303-in. machine-guns but having alternative propeller installations, a Merlin II engine driving a Watts two-blade fixed-pitch wooden propeller, or a Merlin III of similar power having a standardized shaft for de Havilland or Rotol three-blade metal propellers.

Convinced that the RAF would buy the new fighter in the prevailing mood of rearmament, the Hawker Company decided, in March 1936, to precede with the production drawings and to make plans for large scale production. Three months later in July, that action was vindicated when the Air Ministry confirmed that six hundred Hurricanes were to be included in its expansion Plan F (which also provided for three hundred Spitfires). By the time the Battle of Britain began, every single fighter in the hands of the RAF counted, and the early launch of Hurricane production had helped to ensure that just enough machines were in fact available to Fighter Command.

Meeting the RAF's rapidly expanding needs proved to be no simple matter and the Plan F target of six hundred Hurricanes to be delivered by March 1939 was missed by some six months. There had been a succession of relatively minor but time consuming problems with prototype development, especially related to the Merlin.

The first production Hurricane I flew at Brooklands on October 12th 1937, fitted with an early example of the Rolls Royce Merlin II that was rated at 1.030 hp at 16,250 feet. This power unit drove a fixed pitch two bladed propeller and at a weight of 5,459lb the aircraft attained a maximum speed of 318 mph at 17,400 feet.

In January 1939, the Merlin MkII gave way to the Merlin MkIII and with the fitting of a constant speed three bladed propeller and it was this amended specifications that was adopted and all Hurricane Mark I's were constructed using this configuration. Other alterations/additions being the armament which was four Browning .303 machine guns mounted in the wings, metal stressed- skin covered the wings instead of fabric which also covered the fuselage.

By the 27 September 1939, Hawker had delivered four hundred and ninety seven Hurricanes to the RAF against the initial order of three thousand five hundred and was enough to equip eighteen Fighter Command squadrons. But despite the need to bring Britain's fighter strength to its potential, quite a number of Hurricanes were exported to other countries. fifteen went to Turkey, another fifteen went to Finland, twelve went to Romania while one went to Poland.

During late 1939 and early 1940, one thousand nine hundred and twenty Hurricanes had been constructed by the Hawker works while Gloster Aircraft who also took on construction built one thousand eight hundred at fifty.

Hawker also put out tenders for the construction of the Hurricane overseas. One of these successful tender's was the Canadian Car and Foundry Works (CCF) and a license was issued for the construction of both the Hurricane and the Sea Hurricane. A total of one thousand four hundred and one machines were built and of these, sixty were flying by 10th January 1940. The Canadian company built the Hurricane in a number of different versions. The original accepted design of the Mark I, the Mark X which were powered by the Merlin 28 engine and built by the Packard Car Co, the Mark XI which was built with Canadian equipment and the Mark XII's that now incorporated the Merlin 29 engine and 12 Browning guns.

Because of the weather conditions in Canada and especially Nova Scotia where many of them were based, the normal retractable undercarriage was dispensed with and fixed ski's were used in their place. This allowed the aircraft to take off and land on snow and ice.

During 1939 and 1940, twenty four Hurricane Mark I's were delivered to Yugoslavia, and Belgium was also granted a licence to build the fighter although twenty had been acquired from Britain only fifteen of these had been delivered.

The early history of the Hurricane is an interesting parallel in many ways with that of the Supermarine Spitfire with which it was to form an immortal partnership; but while the Spitfire was an entirely new conception based on specialized experience, the Hurricane was the logical outcome of a long line of fighting aircraft. Thus, although the two airplanes met broadly the same requirements, they represented entirely different approaches to the same problem. The two approaches were reflected to an interesting degree in their respective appearances; the Hurricane workmanlike, rugged and sturdy, the Spitfire slender and ballerina-like. One was the studied application of experience, the other a stroke of genius.

When it became clear that the Hurricane was becoming outclassed as a pure fighter, other duties were assigned to it. In October 1941 the “Hurribomber” fighter-bomber came into being, carrying either two 250 lb or two 500 lb bombs under its wings. The Mk IID of 1942 was fitted with two 40 mm cannon for tank busting and two machine-guns, and was operated mainly in North Africa against Rommel's desert forces and in Burma against the Japanese.

The year 1943 saw two important developments in the Hurricanes history the introduction of the Mark IV and the adoption of the Hurricane to fire rocket missiles or, as they were initially known, "unrifled projectiles".

The Hurricane IV differed from the Mark II in two respects: it used a Merlin 24 or 27 which developed 1,620 hp for take-off, and it featured "low attack" or universal armament wings.

These wings were derived from those fitted to the Hurricane IID and could carry the 40-mm Vickers or Rolls Royce cannon, bombs, drop-tanks or rocket projectiles.

The Hurricane IV was in service by March 1943 and was operational in the Middle and Far East theatres until the end of the war, and in Europe until the end of 1944. The development of the aircraft rocket had introduced a new factor in the use of aircraft as ground-assault weapons, and the Hurricane IIB and IIC were the first single-seaters to employ the rockets operationally.

Perhaps the most important sub-variant was the Sea Hurricane. This operated from aircraft carriers, being fitted usually with catapult spools and arrester hook. However, most Sea Hurricanes were not newly-built fighters but converted RAF types, and were deployed originally not for aircraft carrier operations but to protect merchant shipping. To combat German maritime-reconnaissance bombers, some ships were converted into CAMs (catapult aircraft merchantmen) which meant that a Hurricane fighter could be launched from the ship when danger approached. The biggest problem was that the fighter could not re-land on board, and so the pilot had to ditch it in the sea. The main areas of operation for the “Catafighters” were in the Mediterranean and Baltic, but by 1943 the Sea Hurricane had all but disappeared from service.

Of the 14,533 production Hurricanes built, some had gone for service with other air forces. In particular, nearly 3,000 were dispatched to the Soviet Union to aid its fight against the Germans on the Eastern Front. The first Hurricane sorties in Russia were made on September 11, 1941 in defence of Murmansk, pilots from France, Britain and America helping the Soviets in their task.

Twelve 0.303-in. browning machine-guns and